The Party of Chaos and Falsehood

Which raises the question: how much of the response to the public killing of one George Floyd has been an engineered operation by the Democratic Party and its allies in the propaganda industry? I’d say, an awful lot, considering the presentation of events in The New York Times and other organs of the perpetual Resistance that have been luxuriating in existential woe surrounding the indecencies of whiteness, culminating in the fake abject ritual of contrition put on by Ms. Pelosi and Chuck Schumer taking-a-knee in their Kente cloth prayer shawls. Within a few more days, at least four cops around the country were ambushed and shot in the head, but there were no public displays of mourning for them. 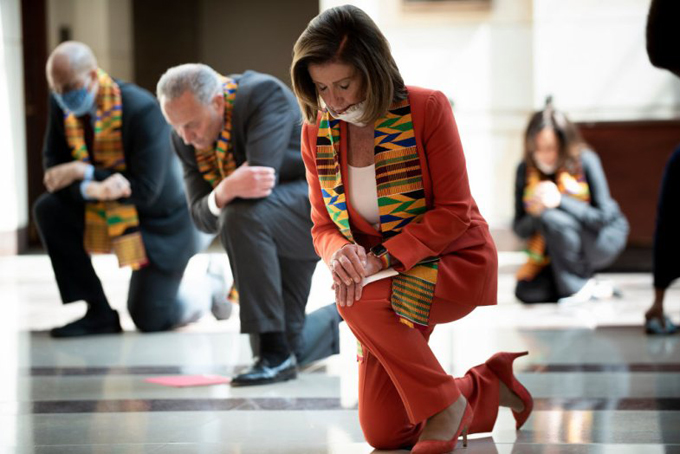 Meanwhile, the country has watched countless scenes captured on smartphone video of young people in flash mobs looting, trashing, and burning one city business district after another — but don’t believe your lying eyes, these were “mostly peaceful protest demonstrations” (Ali Velshi, MSNBC). The police mostly stood by and watched, under instructions to avoid producing a batch of fresh martyrs to feed the flames of rage stoked by the talking heads of cable news. By some miracle, the cops’ restraint prevailed, but many of the trashed and looted businesses will not come back, and the cities themselves will be permanently diminished by the losses suffered.

The Democratic Party Resistance apparently believes that all this mayhem, and the false sanctimony excusing it, works to their advantage in the coming national election. They may be disappointed about how that works out, as they’ve been disappointed in three years of previous gambits to overthrow the government and seize power by any means necessary. The picture of them is resolving into the party of bad faith, foul play, coercion, and tyranny. Even the corona virus scare carries a taint of Resistance manipulation. One moment the populace is hustled into an economically devastating lockdown; and then suddenly, on a fine spring day, they’re incited to mix in moiling mobs of street protests with the predictable result of a fresh spike in virus contagion and the possibility of a second lockdown. Like many activities in our national life lately, it’s another hostage racket, and, guess what, you’re the hostage.

Their most transparent artifice is the utterly false elevation of Joe Biden as their candidate for president. Everybody knows he’s incapable of performing the job, and probably even of functioning through a campaign. His inchoate utterances on events and policy make Donald Trump sound like Ralph Waldo Emerson. He’s left behind himself an evidence trail of financial crimes running to at least nine digits of grift. And, of course, if you believe all women, he’s a sexual molester. Everything about his public presentation is false, including his hair, teeth, and soul.

This past week, his handlers posed him as Grief Counselor-in-Chief (via video from his basement) at the state funeral for George Floyd, accompanied by an inspirational music soundtrack to shore up the sham sentimentality. (Click here for video.) Never have so many hollow platitudes been woven into such a garment of alternative reality for public consumption. Most pathetically of all, the audience of mourners, mere props, as black America has long been employed by the cynical party, went along with the charade that George Floyd was a model citizen and father, now soaring on golden wings to the place on high where you don’t need methedrine and fentanyl to feel happy. A couple of days later, Democratic Party bigwig and Clinton henchperson Terry McAuliffe told a meeting of the faithful that Joe Biden should remain confined to his basement. In a matter of weeks, you may be sure, we’ll learn that the party is compelled to draft Hillary Clinton as poor Joe’s replacement. It can’t be helped. Her turn will not be denied, even if she has to destroy the country to take it.

The PENNY POST reads, republishes and sometimes endorses some of the following media outlets, journalists and bloggers:

Functional cookies enable this website to provide you with certain functions and to store information already provided (such as registered name or language selection) in order to offer you improved and more personalized functions.

Performance cookies gather information on how a web page is used. We use them to better understand how our web pages are used in order to improve their appeal, content and functionality.

Marketing / Third Party Cookies originate from external advertising companies (among others) and are used to gather information about the websites visited by you, in order to e.g. create targeted advertising for you.